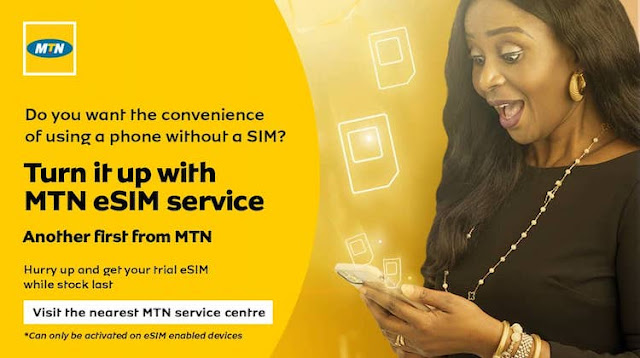 On July 15, 2020, MTN, the biggest Network Provider in Nigeria launched its eSIM (embedded-SIM) service in Nigeria. During a virtual launch, Mazen Mroue, Chief Operating Officer, MTN Nigeria, explained the idea behind this, the technicality of activation on devices, and possible connectivity with other smart devices.

It is not surprising that MTN is the telco pioneering this launch. MTN has been credited for a number of firsts when it comes to mobile telephony and Internet penetration in Nigeria. MTN entered the country in 2001 to become one of the first GSM networks to be licensed, and it is now unarguably the largest telco in the country. It is the trigger behind most caps and floors introduced by the Nigerian Communications Commission (NCC) for telcos because of its perceived market dominance.

How to Activate the MTN eSIM

With an eSIM, you’ll only need to get your eSIM activation voucher linked with your existing profile or the new one you have created, scan a QR code, download your profile and install on any of your supported devices and you’re done with the process. However, you can visit any of the MTN stores so that customer care agents can assist you with the whole process.

Devices that support the eSIM include Google’s Pixel 2 and 3, the newest iPhones from the XR to the 11 Pro Max, of course, the newer ones coming later in the year and the newest Samsung S20 amongst many others. If you have a device which supports the eSIM, you can simply head to an MTN store or visit their website to get started.
For smartwatches as well.

In terms of implementation, MTN is working closely with the NCC on this, The Nigerian
Communications Commission, they have jointly agreed to a 1 year trial with a limited number
of eSIMs which is subject to either a review, an extension or even an outright approval.

Though it is unlikely that eSIMs will replace SIM cards going forward, their introduction seems like good news for telcos especially when it becomes commercially available across major networks. For one, it could end the sale of recycled phone numbers, which is fast becoming a menace in Nigeria.
In the long run, eSIMs could end the recurring need for repeated registration of SIM cards, thereby reducing the stress the process places on users and telecommunication companies.
In addition, eSIMs might make it easier for users to choose their preferred network provider with the reprogramming option which is less complicated than getting a new SIM. This could replace the seemingly ineffective Mobile Number Portability (MNP) program the NCC introduced in 2013.
On the part of the NCC, the mass use of software-based SIMs could inadvertently support the Commission’s directive that stops a user from having more than three SIM cards registered in their name.
Ultimately, with eSIMs, security concerns associated with GSM would be checked. It is expected that the registration process will be more thorough because it will be handled by official stores, unlike the third parties — sometimes unaccredited — carrying out SIM registration now.