How Apple grew to become the First Trillion Dollar Company 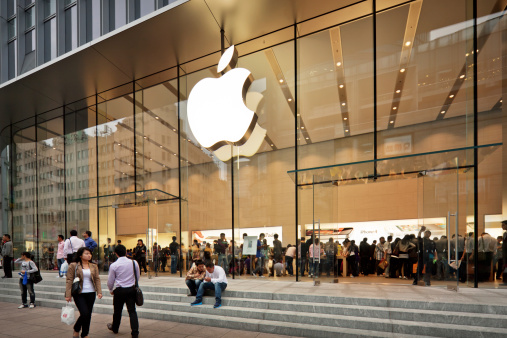 Apple has an incredible journey of how it grew to become a trillion-dollar company. The company hit a $1tn market capitalisation on 20th July 2018, 42 years after Apple was founded. It means Apple’s stock market value is more than a third the size of the UK economy and larger than the economies of Turkey and Switzerland. Apple was co-founded on April 1st 1976 by Steve Jobs, Ronald Wayne and Steve Wozniak. This achievement by apple is ming-blowing as it was valued at only a hundred million dollars on December 12th 1980, when it went public and first listed on the stock market.

Apple had a good headstart as they sold shares 4.6 million shares at twenty-two dollars apiece. This headstart was as a result of what Apple had accomplished in the last four years from when it was founded. Apple had already released the Apple I, Apple II, and Apple III, with revenue increasing
by 533% every year. Despite this financial head start, Apple was worth just 1/10,000 of what it is today. Apple continued to grow consistently although there weren’t any huge spikes in stock value through the early 80s.

In 1985 something big happened that had a destabilizing effect on Apple’s market value. Steve Jobs was forced out of the company by then Apple CEO John Sculley.  Now, this was a very intense situation since Sculley was actually brought on to Apple by Steve Jobs himself. Sculley had previously served as Pepsi’s CEO, and Jobs brought him as CEO because he thought he had the business expertise to take Apple to the next level, as he had done at Pepsi. But things didn’t turn out the way Jobs had hoped. John Sculley and Apple’s board of directors felt Jobs leadership was detrimental to the company, Jobs later turned in his letter of resignation and left Apple, heartbroken and devastated.

Job’s departure from Apple was highly publicized and Apple’s stock dipped slightly before bouncing back in ’86 and spiking in 1987. Apple underwent a reorganization during this time and their business model shifted from lower profit-margin computers aimed at consumers to high profit-margin computers aimed at the pro-market. Apple raised the prices of their newer Macintosh computers and this affected their total sales because PC makers released their own desktop computers that offered nearly the same functionality of the Macintosh but at a much lower price point. This led to a 20% drop in Apple’s share price at the end of 1989.

Apple did their homework and shifted their business model yet again in the early 90s, this time back to Jobs original vision of selling low-cost, low-margin consumer products and aiming for high sale volumes. This initially went well for the company as they released lower-cost computers like the Macintosh LC that sold well due to the high demand for lower-cost computers from the company. But Apple took things too far. They introduced several new models of products like the Quadra, Centris, and Performa lines, in order to make up for the declining sales of their higher-priced machines.
But this caused problems for apple cause the “new” products weren’t really new at all, but similar products aimed at different markets. And this only caused product fragmentation and confusion for customers, who didn’t understand the difference between models. In the 90s Apple also experimented other unsuccessful consumer products including digital cameras, portable CD players, and speakers.
In the late 90s, Michael Spindler replaced Sculley as Apple’s CEO. This happened because most of his plans and ideas failed to deliver. But Apple couldn’t seem to recover from the damage that had been done, no matter who was CEO. The company’s sales peaked at $11.1 billion in 1995 and as their sales fell, so did their share price. This period begun Apple’s downward spiral that everyone assumed would lead to the end of the company.
But in 1997 Apple made a surprising move. They bought the computer company called NeXT.
NeXT was the company Jobs founded after leaving Apple in 1985. Apple offered Jobs a role as interim CEO, essentially giving him the power to reorganize Apple and get them back to being profitable again. At the time very few people actually believe Steve Jobs could save Apple.
When he returned to the company, they were just ninety days from bankruptcy and Jobs
himself admitted things were a lot worse than he thought. But with a little financial help from Microsoft and the release of the wildly successful iMac in 1998, Jobs was able to transform Apple.
Job’s effect on apple was reflected in the company’s share price, which grew month after month until reaching a peak in early 2000. But Apple didn’t stop there, its share price steady through the early 2000s with the release of the iPod in 2001 and iTunes Music Store in 2003. At this point, Apple’s valuation didn’t just remain steady, it started to climb.

In early 2006, Apple announced the first Intel-based iMac and MacBook Pro models. Now, this was a big deal since they were able to transition their computers from Power-PC to Intel way ahead of schedule, and investors felt Apple became a much more competitive company with products based on the new Intel architecture. So their share price rose even further at the beginning of 2006, and this marked a very important milestone for Apple. Because on Friday the 13th of January, the company’s market value surpassed Dell for the first time. And it was Dells CEO in 1997 who said Jobs should shut down Apple and return the money back to the shareholders. So Steve Jobs was set on making Apple a more valuable company than Dell, and when it finally happened, he sent a brief email to Apple employees to commemorate the occasion. It read, “Team, It turned out that Michael Dell wasn’t perfect at predicting the future. Based on today’s stock market close, Apple is worth more than Dell. Stocks go up and down, and things may be different tomorrow, but I thought it was worth a moment of reflection today. Steve.” And while that was a big accomplishment for Apple, 2007 was the year when things began to turn out very well for apple.

The introduction of the iPhone took Apple to a different gear. The iPhone is arguably the most revolutionary product Apple has ever made, and it’s definitely their most profitable. Though iPhone sales in the early years of 2007 and 2008 are nothing close to the numbers today, it still provided Apple with a major source of revenue. But more importantly, it solidified Apple’s reputation in the tech industry as a pioneer of revolutionary technology that was unmatched by any other company. This made Apple appealing to investors and its stocks soar higher in value.

Things became even better for apple at the beginning of 2010 with the release of the iPad.Steve Jobs called it the most important product he had ever made. And customers seemed to agree since 300,000 iPads were sold in its first day of release. The iPad become one of Apple’s best selling products ever and investors were quick to buy up as much Apple stock as possible, causing their share price to rise even higher. In 2011, Steve Jobs resigned as Apple’s CEO, appointing Tim Cook in his place. Steve Jobs died of pancreatic cancer shortly after. Since then, Apple has been run by Jobs’s longtime deputy, Tim Cook.

This didn’t have much effect on Apple as some predicted. Apple’s stocks continued to rise until the end of 2012 when the iPhone and iPad began to lose their shine. The company experienced a sharp drop in its share price and took action. Apple figured out that larger displays were the ones in demand and the iPhone 5s was losing out to other smartphone competitors which had larger displays
Apple tried to solve this with the introduction of the iPhone 6 and the iPhone 6 Plus in 2014. And they were a huge hit, especially in China. iPhone sales rose to $155 billion and share prices rose with it.

So Apple’s valuation remained strong until 2016 when quarterly profit fell by 27% due to a slowdown in iPhone sales. But just like in 2014 with the iPhone 6 and 6 Plus, another iPhone was introduced to save the day. Apple released the iPhone X. It lifted the average selling price of an iPhone to a new record and also the share price. The iPhone X was a hit for Apple as it continued to sell till Apple’s market value ended up crossing the one trillion-dollar mark in 2018. So that is the history of Apple and how Apple became a $1 trillion company